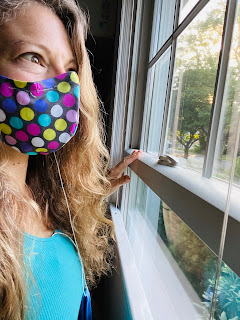 I bought this fabric at SewGreen in Ithaca, NY for my Mom who has been sewing facemasks. It reminded me of bubblegum and seemed happy and fun. After my Mom made a facemask with this, I had a dream I put it on and bubblegum was falling from the sky and then Covid was over. This pattern, and a few other music occurences this week, inspired me to write a new song I call "Bubblegum Rain".

I had just watched Margo Price's second night livestream from Brooklyn Bowl, Nashville. She currently has the #1 Song and Album on the American Chart. The livestream was really well done. There was a full stage, colorful lighting changes, and the fans were streamed onto the walls around the theater. Margot's musicians were all impeccable and to see and hear her play with a full band that moved fluidly between rock, blues and jazz, with meandering solos and extended play sounding sometimes like Phish, the Grateful Dead and even Tedeschi Trucks Band... was something you don't hear on Margot's albums. This was really enjoyable. I had only heard her live once in New York, at Carnegie Hall. That is how I became a fan. Her voice is much bigger than you can imagine from online performances and records. In any case, I was excited she played with Lucinda Williams and the song "Joy", with the hook being, "You stole my Joy, I want it back" was so good as a duet with Margo and Lucinda. Despite my total appreciation for the effort of livestreams, I still wished Margot had a big, happy audience and covid was over. Livestreams are not really a live music experience to the fans, and I'm sure the musicians miss their fans too.

Suzanne Vega released a new album on September 11th, "New York Songs and Stories". Here songs have been with us for thirty years and they are like old friends, but I have even greater appreciation for them now, as I have been learning guitar, trying to write my own songs and also escape domestic abuse. One of her songs that became very popular in the 90's "Luka" speaks of domestic abuse, but most people know her song, "Tom's Diner" as an instant classic. The way in which she tells a story that we hear and visualize unfolding, moment by moment, makes this song memorable and placed her in the category of singers who create magic through descriptive and poetic storytelling.

After looking out the window with the bubblegum facemask, hearing Margo and Suzanne's new album, and practicing blues guitar from a new book I have, I started to think about how the clouds would open up and candy would rain down from the sky like a piñata. I wrote this and started a guitar part. I sang the voice into a voice recorder on my phone, and added a guitar part. I will try to combine them in Garage Band. I wish I was fluid with Pro Tools or Abelton so I could really edit this work, but even better would be to collaborate with someone who really knows what they are doing. Be safe all! Thanks for listening. -C

(Trill BDBDBDBDBD)
EFG GABA
Everything around me seemed to spin and shake,

He exclaimed outloud
"Well, I'll be damned"
"If this isn't the strangest weather
We've ever had"

and the trees in the skies
continued to sway
as it rained.... Bubblegum and candy all day.

(Trill BDBDBDBDBD)
EFG GABA
Everything around me seemed to spin and shake,

Then it rained... Bubblegum and candy all day.

Now I have 12 songs written during pandemic. I hope to do something with them. It is horrible to feel like you have all this creative story telling and a voice, and you don't know how to perfect it and get it out into the world. I hope I can find someone to help me. I wish music technology came easy to me and I could do this all myself, but I think it would be more fun to collaborate and learn from others who know how to do this.