My 1st Experience with BikeShare in San Francisco 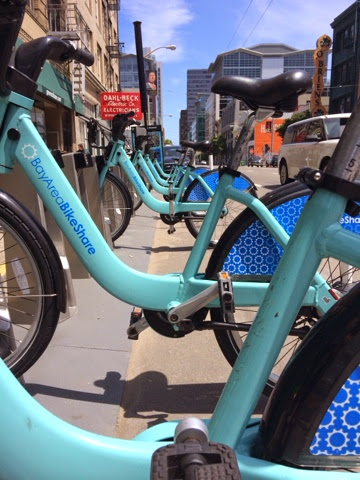 At my lunch break today, I was determined to try out a BikeShare bike at the corner of Howard and 2nd.  I brought my helmet and was prepared to ride down Howard, turn on 6th and end up at Blue Bottle Coffee in Mint Plaza... I did not find Mint Plaza, but I saw it later from 5th Street.

What I realized as a newbie to riding in this part of the city, is that I felt like I was in "survival mode", just making sure I did not get doored or squished by a bus on Market Street.  It's not as easy as it looks to do this happy blue bike thing. 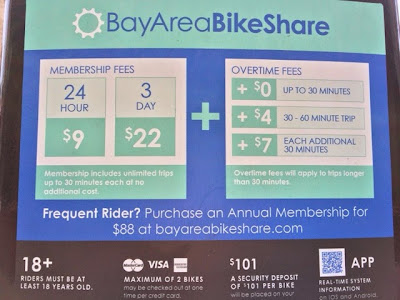 Here is what I learned.

- The user interface asks you to press a   > button on the left of the screen to continue... it should be a more intuitive interface... a green button that says "Next" on the right side of the screen. 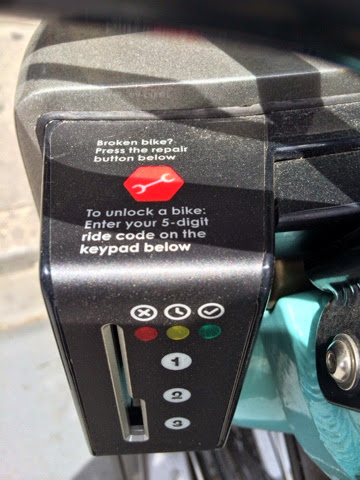 - Once you pay, it is hard to find where you put your code in to get the bike out.  It is down low, on the left side, under the left handle-bar.  Once you punch the code in, the bike is "Open" to take, but I tried to pull it out and nothing happened.  Then my green light turned yellow and I had to call the number to get help.

-I called the number and they explained that I had to swipe my credit card again and then it would show "Request a New Ride Code" on the lower left corner(the smaller white button under the button that says "Rent a Bike". This gave me a new code. 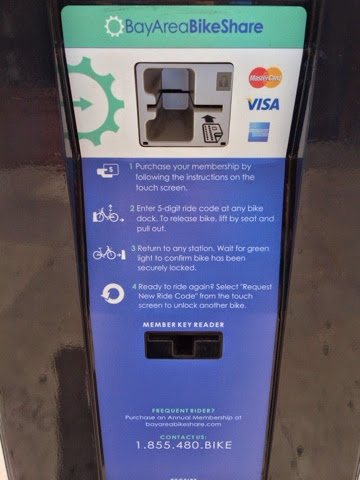 Once you punch the code in and get a green light...
- You have to PULL REALLY HARD to get the bike out of the rack.

- Adjust your seat before you try to ride in traffic.

-Be prepared to go on the sidewalk.  It's scary out there.

Howard Street was pretty good because they have Bike lanes all away down to 6th.  However, at every large intersection, buses and cars turn right and take up the bike lane by packing 4 or 5 cars down from the intersection crossing over the bike lane.  This is when I didn't feel comfortable and started pulling my bike up on the sidewalk and crossing at the light on foot, pushing the bike with pedestrians.  Then I would re-enter the bike lane after the crosswalk.

On sixth, you're basically riding between parked cars and other cars moving next to you, and there is no dedicated Bike lane there.  On Market, although there are green Bike lanes now, the buses pull right through them to pull over to the bus stops and block the bike lanes.  This is where I pulled up onto the large, wide brick sidewalks on Market and just rode on the sidewalk to get around the buses. Then I would pull back into the bike lane off the sidewalk when it seemed safer.

The experience for me was actually okay because I ride fairly regularly, but I could never see my parents doing this or anyone who is not comfortable on a bike.  It is definitely not easy, but it's certainly faster than walking.

It takes some understanding of how to use the machines to return the bike and get another one out.  What they want you to do if you rent a 24 hour bike, is to ride it to another station within 30 minutes and then return that bike and pull out another one.  The point of this is actually that the bike is locked at the new station that you stop at.

So if you ride to get lunch, you would pull into the bike station on Market, lock it into the machine, get your lunch, return to the card swipe machine and swipe your card, then punch the "Request a New Bike" code button again.  Then you would pick any bike at the station, punch in your code, and pull that new bike out and return to the next station. (it might be the same bike you took out before, if no one else has taken... Or it could be a different one.)

I rode the Howard - 6th - Market -2nd and Howard rectangle that took me 45 minutes, including standing in line for coffee.  There are no coffee or beverage holders on these bikes, but a platform with a bungee.

I got some exercise and adrenaline from being in "fight or flight mode" so I didn't really need coffee after my ride.

I wish San Francisco would divide all bike lanes from bus lanes with a median and/or put bike lanes on the sidewalks on Market around all the bus stops.  It was fun, but the difficulty is fairly high at the moment.
Update
To be fair, there are lots of places in SF that are very bike friendly, but this section I was in today where I tested BikeShare is probably one of the busiest downtown areas. My opinion is they should create a totally separate bus route and a totally separate bike route so the bikes and the buses never have to cross paths at all.
The bike ride from the Golden Gate Bridge to the Marina through Fort Mason and around the Embarcadero to AT&T Park is a lovely and much safer ride.  I have done that many times and never felt stressed out.
Also, biking in Golden Gate Park and around the museums is also a lovely and safe place to ride.