Pierce Point Ranch Barn: Ghosts from the Past

The Barn from Nathan Moody on Vimeo.

Delighted to share a wonderful series of video imposed with video effects by an old friend from Maine, Nathan Moody, now residing here in the Bay Area and using his creative and tech skills to create modern magical classics like this one.  I love it!

"The Pierce Point Ranch on Tomales Point ceased operations in 1973. Three years later, Congress authorized creation of the wilderness area incorporating that ranch as habitat for the reintroduction of tule elk. Beginning in 1980, NPS invested in the rehabilitation of the ranch core, citing it as the best example of a nineteenth century west Marin dairy ranch. Pierce Point Ranch was added to the National Register of Historic Places in 1985, and was subsequently opened to the public as an interpretive site."

Moody is not the only one to use this building for personal expression and art.  Pierce Point Ranch has been painted countless times by local Marin artists and is photographed daily by local photographers and tourists alike.  Some of my favorite paintings of the location include works by Martha Borge, Christin Coy, Richard Lindenberg and Barbara Lawrence.  I have yet to paint the barns at Pierce Point, but I guess I'm due.  Thanks for reminding me, Nathan.

In honor of Halloween, ghosts from our past and all, I will share three freaky and ghostly memories from my past with Nathan et all...

1.  Nathan had a gas mask in his first SF apartment near Clement. This, and his amazing but wild sketchbook drawings used to freak me out, being the polite and sheltered Connecticut gal I was back then.  Today, it is commonplace to see gas masks and surgical masks in art and murals around SF Mission District and the current street art of Eddie Colla, and of course, Banksy.
2.  I am ever so grateful for the many summers I worked as a lifeguard and swim instructor at country clubs in New England, updating my skills each year.  I pulled Nathan out of a black lake in Maine when I thought he was goofing around, but he really could have drowned.  When I see the amazing work Nathan is doing at Stimulant, and the 10 mile kayak races he is doing around the Bay Area and beyond, I thank God for making me do the right thing in that split second when I pulled Nate out of the water.
3. I haven't had the privilege to actually speak to Nathan since 2000, when I separated from our very good friend.  It is a shame to have lost two incredibly bright, talented male friends that I respected so much back then, and there isn't a day I don't wish both of them well and hope our paths do cross again someday.  Hopefully, we won't all be wearing gas masks or having to pull each other out of the water.

Nathan, you are doing amazing things.  Keep up the good work.

Until we meet again...  Peace.

Send in the Cows... There ought to be cows.

Finishing this commissioned painting today (please view my previous post to learn more about this commission), I added the tiny cows on the warm mountains behind the ranch houses and modified the lighting to hills on left.  I tried to take a better image of the cows, but not terribly successful:

Happy to be finishing on a Friday. 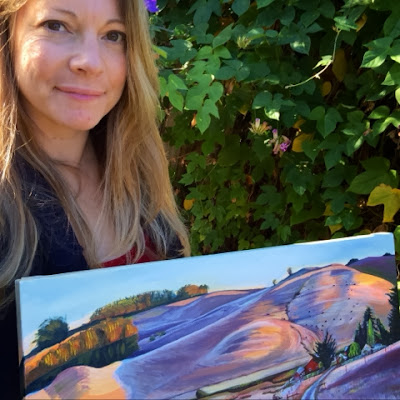 This is day three, working on a 12" x 24" commission for Lisa and Loren Poncia of Stemple Creek Ranch in Tomales, California.  Lisa Poncia found me on Twitter with Marin friends, Peggy Butler @iPeggy and "Sally Around the Bay" @Sally_K .  I had a wonderful day touring the Poncia's properties with them more than a month ago and saw a baby cow born in these honey colored grasses.

Loren is a 4th generation rancher and winner of the 2013 J.W. Jamison Perpetual Trophy at the Sonoma County Fair.  His sustainable practices were more than apparent in the landscape the day I spent with them.  As we drove up into these rolling hills, Loren pointed down to Stemple Creek.  All along his property, he has let the trees and vegetation grow in and around the creek and it is lush and green, even in this dry, late summer weather.  Next door, at a nearby farm, cows were down in the creek and the vegetation had all been cut down.  Removing the vegetation around a creek causes run-off to polute the creeks and letting cattle in the creek too frequently can also cause problems with waste pollution.  It was night and day to see the difference Loren's practices had made in just my one short trip.  His efforts in sustainable ranching are a big reason for his awards this year, and you can tell his entire family really loves what they do.

Lisa is a poetic writer and photographer, and does most of the communications work for Stemple Creek (stemplecreek.com).  She is an avid Twitter and Instagram poster and I love seeing what's happening on the ranch in real time.

The image for this painting of the Burbank Family Ranch, at the end of Burbank Road in Tomales, was captured about 3 minutes before the sun dipped below the hills to the right side of the painting (aka "the west side").  A herd of cattle, about 40 in total, were grazing in the orange light on the rolling hills behind the barns.  I was very happy to capture that moment of peace and special lighting, as I knew it would translate well into a colorful painting.  Stay tuned for the final piece.  Please visit Stemple Creek Ranch online to learn more!
No comments:

October 2013
What a busy September!  I thought I was going to have time to paint, and ended up working for 3 weeks, assisting local friends with contract production art.  I absolutely loved getting to visit and work with Nutiva (organic superfoods) in Pt. Richmond, California.  They have a great office where they have Yoga and healthy drinks and foods several times a week.  They have a succulent garden and a full veggie garden where many in-house workers harvest their salads for lunch each day.  I really enjoyed meeting their marketing team and assisting with some label mechanicals and fun projects too.  I can't give away company secrets, but it was a nice place to work.

So, I started this first commission of a West Marin Farm.  This is the first day's work.  I am planning to finish it this weekend, however, kids, homework, Halloween and all kinds of excuses seem to be getting in the way.

I even started a new website for myself that will work well on mobile devices, and added an e-commerce "SHOP" feature to the site.  The below page is the EXHIBITS page of the site, where I realized I have shown at more than 21 places around the Bay Area, many of them not even listed... I was thinking I forgot the Civic Center and the Veteran's Memorial Auditorium, and a few more...
All this marketing effort for my own business takes a lot of time.  I can't even imagine what it would be like if I could really "just paint".  That never seems to happen... not yet, at least!