In the Studio Today: The Art of Loss 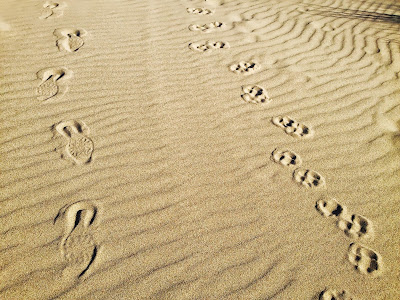 Sunday  July 14, 2013
I apologize to those who are looking here for amazing Google Glass videos and paintings.  Today was not a day for either of these things.  I saw a beautiful wedding in the redwoods yesterday, but I also had one of my sons throw rocks at me and not behave well towards me at all.  I have a difficult relationship with my sons father that is not getting any easier.  I am in rough patch, trying to move on with my life, and I think all the emotions spilled out tonight when I watched something die.


Tonight I watched a lizard die.  It was perfectly still as I passed over it, but I noticed three tiny ants crawling over its back.  It’s head was up, and it had an alert pose, but it had some darkness around its mouth.  I had seen lizards freeze like this before, staying completely still to divert prey or something moving, but this one was different.  I took a stick and lifted him off the grey, powdery dirt trail, where he blended in completely.  As I moved him aside to the edge of the trail, he moved ever so slightly, and I saw his white belly was stained bluish green, like ink had bleed over him in patches.  His tail swooshed once in an S, as if the energy was passing from deep inside to the tip of his tail one last time.  Something came over me, and I airlifted the little guy on my helicopter stick, down the trail, he hung on to my stick for dear life with his left forearm for one last ride.  I turned left at where the trail opened towards the blue lake at sunset, and gently tossed him and stick into the water.  I watched as one tiny bubble came out of his lifeless body and rose to the top of the water.  He lay belly up on the shallow bottom and I cried.  The tears are still pouring out of me, more than thirty minutes later.

I have thought of every time I have watched something die that was not meant to die.  This little lizard was probably crushed by a jogger or a dog on the trail.  There was nothing wrong with him and no sign of malice from an animal or bird.  I remember in my teens, driving home from the movies late with my friend, Patty, and watching a raccoon that had been hit by a car flick it’s tail and limbs in the street one last time.  It was horrible to watch, and Patty and I felt sick for the rest of the night.  That image never has left me.

My first dog was killed by a speeding red monster truck right in front of my eyes in Tahoe, the same year my only husband left me.  I had to watch my amazing Border Collie, Wiley, pass away right before my eyes, loving him as if I was putting down an old dog, but he was only 5.  He was the smartest dog ever, and I fully believe he was autistic and this allowed his wild and magical talents.  He knew the name of every toy we had for him and could retrieve any one of 30 or more toys on command from his Radio Flyer wagon.   He would spin in circles when my friend Kate played flute; 10 times to the right, and then 10 times to the left, stopping occasionally to salivate and look dizzy.  He had such a sense of humor and he knew it.  He could also ease my heart to a stillness, just lying beside me and resting as if everything was perfect.  He was funny, brilliant and loving, but his last request to fetch a pine cone we were playing with across the street ended with him running back to me with it and being run over, right before my eyes.

I don’t like untimely deaths, and I definitely do not like watching death in animals or people.  I was in the nursing program for a year at College of Marin.  I saw a few people pass away on my shifts, and I saw families loving their close relatives who were on respite.  It is not my forté to deal with death, nor has it been my strength to get over my marriage that ended in an untimely way twelve years ago.  Just as I have suffered, watching the last moments of life bubble out of these creatures and my best canine friends, I have suffered watching my last efforts to connect or reconnect with my first husband, who left when I had an affair with a teacher I was taking night lessons with.  A teacher who gave me wine at night while teaching me and later told me he was inviting high school-aged girls that “looked just like me” into his house the way he did with me.  It was a creepy and awkward thing that happened and there may have even been possible criminal actions.  I will never know the truth, but I will always have to suffer the consequence, that I lost my best friend and have watched my own, ailing brain try to ask him to converse with me for twelve years, hoping that one day he will not really be dead and that the last bubble of air is not gone.

Maybe someday he will get it, that he still meant everything to me and that I am still the same person.  I had kids, I went on, but I have never loved anyone else.  I had a partner that has helped me raise my twins, but there is no love here and I am working to move on.  I am fighting against the ants that walk over me, trying to prevent being left in the dirt, still and blue.  I want to leap across the trail, vibrant and into the tall grasses and run with my lizard friends once again.   I am tired of being alone in my mind and I don’t want to die with just a small white bubble released and my white belly up to the sky.

I wonder if the lizard felt the last moment, floating down slowly and weightlessly towards the soft bottom.  I wonder if the bubble was a sigh of relief and peace.  I want to think that I helped him pass on in a better way than being eaten alive by the ants.

Maybe our ex-husbands and wives can find a way to help us feel better than just dismissing us and never speaking to us again.  I guess I feel like I’ve been imprisoned for twelve years since he left, and I haven’t been able to feel real again.  Most people tell me it will come with a new love in a new time.  When my sons are older and I have a way to date freely again.  Other people just don’t talk to me about love.  I enjoy other people’s weddings and commitments to each other, their happy families and appreciate that others have real love that has not died.  They all give me hope that it is out there and if I am still here, there will be moments of love to live for.  There is time to help others, give and teach my sons, walk with my dog who doesn’t think about the lizard.  There is plenty of positive distraction in the world to help me pass the time from loss to love.  I am trying, and I don’t want to hurt anyone.  I am here to be a positive role model for my sons and a supportive friend to all.  I also want my ex to know that he is still loved, and his choice to be with someone else is absolutely wonderful and fine too.  I just have a wish that we could all get along and at least communicate again.  My brain is aching with the pain that my only best friend that was not a canine is still out there, living his life, and I don’t get even a word of recognition once in a while.  It’s a huge bummer, and I think this is the hardest road I’ve had to travel.  Living with someone that is not the right person has been very hard, but it is something I know has an ending and there will be a different future.  Living every day, not knowing if I will ever hear from my old friend… this is probably worse than watching innocent animals die.  It really sucks.

Well, I feel better just saying it.  You know?  I am thinking a lizard painting is in order soon, and maybe a couple dog paintings as well.  It will help keep their spirits alive and my heart from aching.

Though this dark moment certainly does not diminish your radiance nor define who you are, it reflects your depth and candor and I could not take my eyes from the page.

Thank you, Aiko. I have a hard time leaving up my posts that are truly honest, but Writers like Anne Lamott are helping me to get it out and let it be. It helps, and probably is much better writing than when we try to hide the bad things under the rug.