The Art of Glass: Day 2-3 with Google Glass

It's been a fantastic two days of learning and fun with Google Glass.

Wednesday Night 6/26:
I returned on the last ferry from the city.  I found a seat with a plug and charged Glass on the way back home.  As I was exiting the ferry ramps, I snapped this shot.  I am intrigued at the camera's ability to capture night images, and then enhance them with color.  This was straight out of Glass, with no other retouching:
As I exited the ramp, I also got my first family asking me, "Is that the Google Glasses?"  Yup... It sure was.  This family was visiting from Florida, and the father and his two daughters both got to try Glass.  Boy, were they blown away.  How often do you meet a stranger in the night with Glass and they offer to let you try it out?  It's very fun to share this new technology. 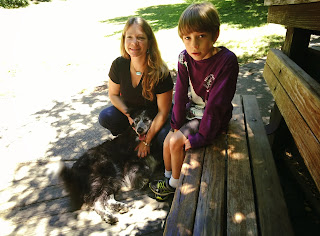 I picked my sons up from tech camps in Marin and we headed to the creek with the dog before we had lunch on the street in San Anselmo.  I taught my 11 year old twins to use Glass in Creek Park, and then they each had a chance to take photos and record videos with Glass.  Within moments, both of them were using the basic features with ease.  Here are some of their photos:  Aidan took his first shot of his brother, pictured here in purple.  He also took a pretty nice shot of me, the dog and Blake, with little effort.  Due to the wide angle, it seems hard for kids to cut anyone out of the picture.  Great!

I took a 10 second movie of our dog, on the bridge.  It was easy to put her leash on with my hands free.

Mesa is the best.  It's fun to see her on video. 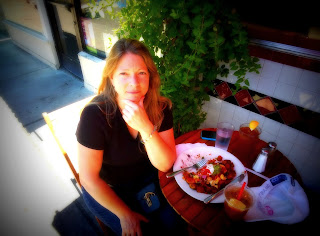 When I was seated outside of the café for lunch, I had a couple comments, "Cool"... as people walked by and saw the Glass on my head.  Marnie Delaney, owner of Doodlebug stopped by and wanted to give it a try.  She took this photo of me with Glass.  I edited directly in Google +, where Glass automatically backs up the images that you take when you are connected to wifi.  All images, at this point in time, must be shared to Google+, but you may tweet an image with no text, or send an image to Facebook with no text.  I am an iPhone user, and they do not have the app ready yet that will allow me to send better tweets and FB posts straight from Glass.  I have to download the photos and tweet or FB them later if I want to add captions.  This is a huge deal, and it has to be improved and ready before anyone will buy this device in the mainstream market.  People love to share their photos... and they want to do it they way they like, so I look forward to the sharing apps being released.  If you are working on one now, please contact me if you need a beta-tester! (not sure if Google will allow it, but I'm in!)

We took a great video of fish in the San Anselmo Creek yesterday afternoon.  The glasses come with polarized clip on shades, and a pair of clear shades as well.  To extend a video beyond 10 seconds you have to tap the headpiece twice to extend it indefinitely.  I tried to edit this video unsuccessfully(I cut clips off the front and back, but it wouldn't save), so I did not post it.  I hope to find a better way to edit clips and intend to compile an iMovie with many clips from Glass eventually.

I drove to pick up my sons from camp and took a quick snap from the Glass as I crested the hilltop by the Civic Center on the 101.  Here is the result: 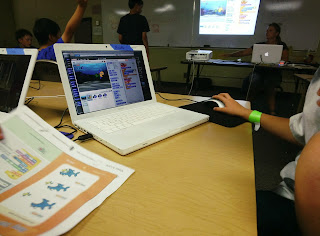 I was excited to share Google Glass with my sons' computer programming camp.  The kids were learning animation in SCRATCH and they were all really wowed by GLASS.  Of about 20 kids that tried it, all were able to take a photo, record a video and could see the screen really well.  They loved it.  One student, who had his own prescription glasses had a harder time, but he could see the screen when he put Glass over his own glasses.  (I have tried this too, and it is doable.  It's obviously better to wear contacts if you have them at this point, but you can get it to work with glasses.  They will have to work on this element for some people).  One boy mentioned that he felt a little dizzy after trying them.  One girl was very soft spoken, and had a hard time getting Glass to move from the start screen to the second screen where you can initiate a list of voice commands.  (You can also swipe through them with the side bar that is the arm of Glass, but that is harder to teach kids to do in a short amount of time).  The swiping and tapping of the side bar works really well, but it does take some practice to get comfortable with it.  Here is one of my sons, who was in a moviemaking class, being recorded by another student.  It's funny how kids are pros at these things from the instant they use them.  I can definitely confirm today that kids love the photo and video recording aspects of Glass, and they think it is really, really cool.

So... I haven't gotten to try this on my bike yet, but I feel like I have spent the last two days learning how to use this and that I could now, officially embark on the mt. bike trails.  Stay tuned!

Enjoy these other videos I created using Google Glass:

• My San Francisco Adventure to Pick up Google Glass