Yesterday, I had an opening reception to attend where my first "City Bike" painting(see my previous post) was a part of the exhibit "City Streets".  I wanted to get the family out to see the exhibit, but with three wild boys, it is almost impossible to convince them that leaving the house on the weekend, or going to anything moderately cultured is a good idea.  Boy, did the complaints fly free all of Saturday night and into the morning.

However, my plan involved all of us riding bikes in Golden Gate Park before the reception, which I thought would be fun and tire everyone out, so that by the end of the day, we could pop into the reception with little fuss.

It worked!  We started out parking on 25th and Fulton, and riding into the thick of the SF AIDS Walk 2012.  That was super fun to ride alongside thousands of people, dressed in matching t-shirts, cheering and happy.  We stopped at the Conservatory of Flowers (above photo) where the marigolds and lawn were orange and bright, SF Giants colors, blazing a fun path for us to visit.  We used the restrooms there and decided we would come back to see the dinosaurs and prehistoric plants another day.

We heard the band playing near the DeYoung, stopped for hot dogs in front of the Japanese Tea Garden, and then rode to Stow Lake.  None of us had ever been out in the pedal boats before.  Brian and I were both surprised that in our almost 20 years here, neither of us had ever rode the pedal boats in Golden Gate Park.  We were even more surprised that the concession stand carries "Three Twins" ice cream in tons of flavors!  It was a match made in heaven.  We saw ducks, geese and turtles in the lake.  We saw the waterfalls, went through tunnels and did "donuts" in our boat for fun.  The boys were so happy to pedal some more, from bike to boat, we all pedaled until our legs were sore and we all were quite tuckered out.

This is when we put the bikes back on our car, and headed for Polk Street, where we went to see the exhibit of city paintings at STUDIO Gallery SF, owned by Jennifer Farris and Rab Terry.  Blake and I got out while Brian drove around looking for parking.  We went through the entire gallery and did not see my painting.  There were some really great works.  Colorful scenes from all over the city, including the Golden Gate Bridge, were exciting to see up close.  There were puppets and a video that Blake really liked.  As we approached the front of the gallery, we ran into Jennifer, that said, "Did you see your painting?"... I responded, "No".  She turned us around to the window, and showed us the "sold" sticker.  She was delighted to share that a couple married in San Francisco who are cyclists had been looking for a bike painting, and had come back and purchased it before the reception. 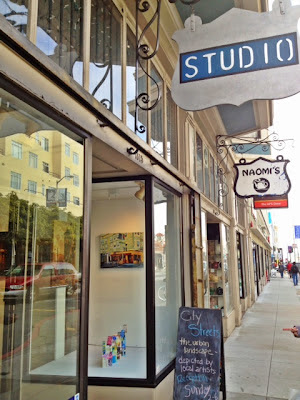 What great news.  It was the cherry on top of a perfect day, biking in the city with my family.

Now, inspired by this progress, I will head off to paint at least four new/unique city bike paintings by September for the show at Café Ross.  Until then.... Keep pedaling! 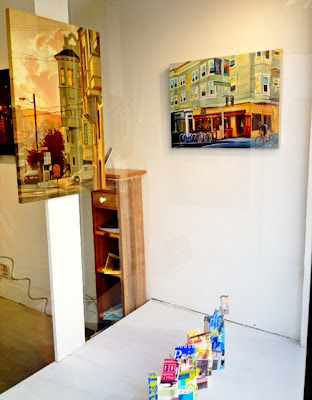 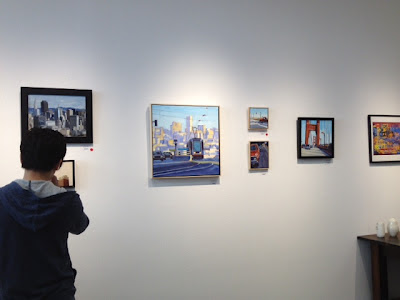 It's so exciting about the painting being sold even before the reception. I love that painting ... and look forward to more from you in the series!