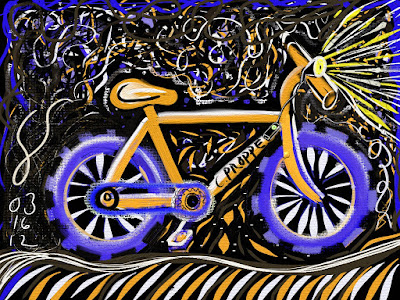 Pheew!  That was a tough learning curve for this little bike.

Yesterday, I drew this same/similar painting on the iPad and the app crashed- "ArtRage" quit on me and lost everything.  Since I had turned on the "record to script feature", I had hoped at least something had been saved... but there was nothing.

Tonight, I was careful to "save frequently" and the app did not crash this time. Honestly, yesterday's lost painting was better than this one... Why?  Because it was more spontaneous, had more layers of built up and edited colors, and was my first attempt.  This image seems more contrived with less details as compared to the first effort of Day 8/365.

What I also learned is that even though I saved the script that records my brush strokes to play back at a higher resolution later, I can't do this unless I buy the app for my Mac.  They have a special now for $29. but I want to test out the 6 other painting apps before I go and dump more money into this product.  Although $29. is not a terrible price, I am planning on reviewing 6 additional iPad apps, and I want to purchase these first.  Stay tuned for my own detailed review on all the painting apps for iPad!