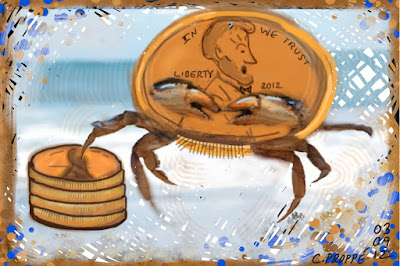 I work part-time, and it just isn't enough sometimes... A car broke down this week, and things got very tight around here. While we have a roof and can feed the kids, extras were not an option this week. I just started thinking about the term "pinching pennies" and wondered where it came from.

Here's what a search came up with:
To trace "in a pinch," we start with the verb "to pinch," which came from the Old French "pincier." The literal sense of "to pinch" is "to squeeze, especially with the fingers and, of the human body, especially in a way that causes pain or discomfort." Since it first appeared in English in the 14th century, both the verb and noun forms of "pinch" have taken on various figurative meanings. "To pinch" has meant, among other things, "to afflict or harass," "to steal" and "to be miserly" ("pinch pennies"). As a noun, "pinch" has been used as a metaphor for, most importantly for our discussion, any sort of severe pressure, difficulty or hardship that "pinches" a person. Thus we quite logically say that to be in such a situation is "to feel the pinch" or "to be in a pinch." This use of "in" (originally "at" or "on") a "pinch" dates back to at least the late 15th century, and the use in baseball of "pinch hitter" to mean one player substituted for another at a critical stage of the game dates back to 1902.