In the Studio Today... Press Release:
"The Elements" at Art Works Downtown

I have been working for Art Works Downtown since August 2011 as their Communications Coordinator.  My job consists of graphic design for print and web, and the occassional press release with a bit of fun writing about art, where I get to play "art critic".  Here is my second press release written for AWD.  Enjoy! -C.Proppé
---- 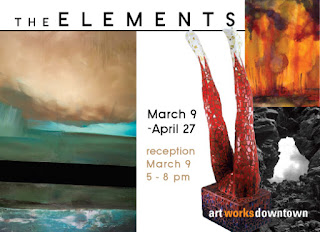 SAN RAFAEL, CA, FEBRUARY 23, 2012:
Art Works Downtown announces “The Elements”, a new exhibit in the main gallery at 1337 Fourth Street, San Rafael, CA, March 9 through April 27, Opening Reception on Friday, March 9 coinciding with 2nd Fridays Art Walk. A 2nd reception will coincide with April 13, 2nd Fridays Art Walk. This exhibit has been curated by Maria Medua of the SFMOMA Artists Gallery (www.sfmoma.org/artistsgallery). The exhibit features 32 Bay Area artists working in a variety of medias and styles. Selected from a pool of over 400 submissions, selected works have kept to the theme suggesting fire, water, air or earth.

Medua says of the works selected, “Expanding upon the theme, some of the work explores our relationship to the planet, which now could be described as fragile at best. Artists do their job when they remind us to see what is right in front of us. In this case the message might be summed up as, “we are all in the same boat.””

Artist, Pattie Grey of San Anselmo, has created “a chorus-line” of mosaic sculptures, one for each element: Water, Air, Earth and Fire. Each piece is a torso with legs in the air; the torso extending from a base of Earth, waves, a cloud, or fire, respectively. Grey’s legs exposed to each element have an immediate appeal and force us to think about humanity in the natural world. 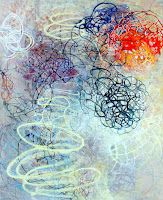 Carol A. Levy of San Rafael, has taken a more abstract look at the theme, with her acrylic on canvas painting, “Spacious Flow”. The background colors suggest a field of air or water, while swirling, mesh-like objects, suggest forces of nature, especially one red and orange tangle that evokes a ball of fire. This piece has the sense that an intricate weave of ideas is melding together, much like the web of life. 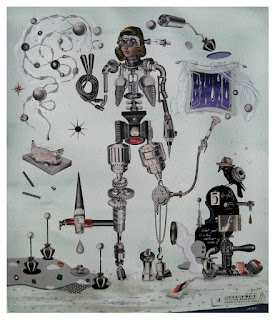 Deborah Hayner of San Francisco, has created a piece “Cyclone Wildebeest”, that recalls Rube Goldberg contraptions, the whimsical meta-mechanics of Swiss artist, Jean Tiguely and the world of sci-fi fantasy. This mixed media, watercolor, goache and ink work shows a robotic girl, seemingly running on the power of raindrops from an open window, fire in her belly, and a hen floating in this mechanical confusion. A sign reads, “What good is a hen without color?” A contemplative crow with a detective’s hat looks on to the scene, observing the mysterious contraption and pondering survival in this bizarre new world. Even Hayner’s use of the wildebeest in her title recalls the current battle of man against nature, as wildebeest migrations are threatened by competing human demands on the landscape. Hayner expresses the complex and bizarre realities we are forced to deal with as our demands on the earth’s elements threaten the world towards sci-fi drama proportions.