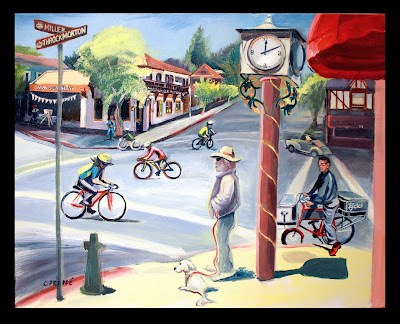 "Saturday afternoon on Miller & Throckmorton", 16" x 20", o/c.
Final painting. Started at the Mill Valley Paint Off, 2009, completed in studio.
This is my painting from the Mill Valley Paint Out, 2009... after a second day in the studio. I had originally wanted to paint the scene with the street signs for "Miller" and "Throckmorton", as well as add the lip of the red awning from the Depot Cafe as a repoussoir element. I also added a woman driving a classic mint green convertible in the background, as well as the Cici Gelato bike. Cici sponsored the paint off this year, and sold gelato from Lytton Square during the judging of paintings, and I managed to capture a few shots of the bike and rider, leaving the Depot in his new, burgundy red clogs that matched the bike. I decided to go with the quirkiness that this paint off result produced, and include as many people and bikes as possible. It has a feeling of being a fun, friendly illustration, rather than a work of realism. Below is a detail of the Cici Gelato man and bike. 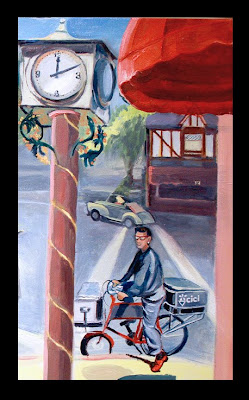 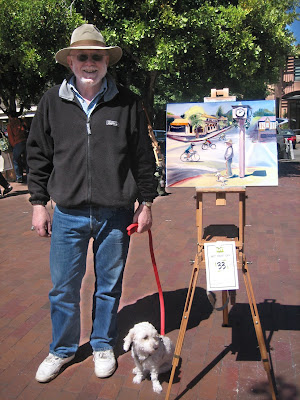 Models, beside "Miller and Throckmorton Saturday";
16" x 20", o/c. (Click image to enlarge).
The man and dog standing beside my painting showed up about 10 minutes before the end of the paint out, so I asked him to stand by the clock tower, and I painted him and his dog into the scene. It was fun. Most of the people always paint the red awnings of the Depot Cafe, and the last painting here, by Scott Grabowski, won first place and the people's choice award. Mill Valley just loves those awnings. 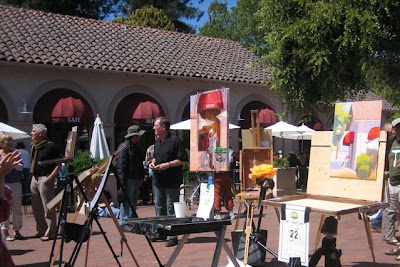 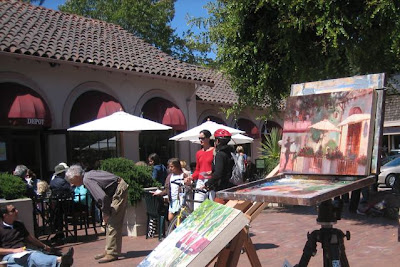 Pam Gould, of "More Marin", the blog... also visited the event and wrote us up on her blog! Here is the first press I know of about the event: (Mouse over the images to read the artist's names)
"Paint Off in Mill Valley draws enthusastic crowd"