In the Studio Today... The Art of Creative Writing 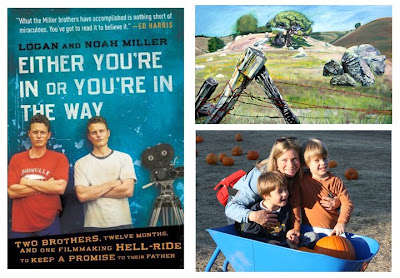 From Left to Right: Cover of Miller Brothers book, my painting of Nicasio Fence Post by Old St. Mary's Church, and photo of me and my own twin boys at Nicasio Valley Farms, 2008.
My knee is still throbbing from surgery last Friday. Being in physical pain is something I am really not good at. I've survived years of emotional pain, but the real, OUCH kind of pain that feels like someone is sitting on the back of your knee with a truck tire... no, this ain't for me. Wrestling would not be my sport of choice. However, here I sit after having read a book for 4 hours that actually took my pain away with out medication. "Either You're in or You're in the Way", by Logan and Noah Miller. This book is phenomenal. I laughed out loud, cried, and laughed out loud again and just could not put the book down(Ok, confession... minus the 10 minutes it took me to eat a yogurt).

This book means a lot to me as a Marin resident, a mother of twin boys, and as a painter, who loves West Marin. I lived in the hills of Fairfax for seven years in a rat infested rental home owned by Forest Knolls women who rode motorcycles. When we told them the house had rats, they said, "Welcome to West Marin". And over the next years, I witnessed baby deer born under our deck, wild turkeys landing in flocks on our roof around sunset, and rainbows you only had seen in movies, crossing over the three mountains we could see from our house. There is something about the land here that is so special, you just don't want to leave. It perhaps has to soak into you a bit, and you have to be tough enough to live with "great habitat", as the watershed district once told me... West Marin is a true gem, and until I read the Miller Brother's book, I didn't realize fully that this has become my home.

Their book is not about Marin, but about the creation of their film about their lives and their father, who lived in Samuel P. Taylor park for 15 years, as a homeless roofer. He was an alcoholic and loved by everyone he met, but he didn't get the help he needed and ended up dying in 2006 in prison. The most amazing thing is how these boys, Logan and Noah Miller, were able to love him for who he was, and promise to make this film for him, and do it in one year. The power of a "deadline" is very amazing and real for artists. Perhaps for everyone in life, but I have found that if I don't have a deadline, I just won't get the work done. I want to commend these boys for their will and love of their Dad, and Northern California.

As a painter, I often see and feel things in the landscape, but can't describe them the way I'd like to in words... so I paint. The Miller Brother's can describe scenes with words, that I could probably paint... For example, "We drove along the river, passing rolling vineyards glowing shades of pink in the dusk as the redwood hills turned to shadows against the dying light behind them." I live to paint moments like these. Here's another one of my favorites from their book: "Later in the afternoon, the sun warmed the redwoods above the Monte Rio Bridge and we jumped off the concrete slab and swam in the cool waters below."

For the past 4 years, I have made the drive out to Nicasio to our favorite pumpkin patch, to let my twin boys pick out pumpkins, run through the hay maze, and jump and slide in the big jumpees at Nicasio Valley Farms. I would go more than once per season, just to let the boys jump off steam and I would relax and take photos of the rolling hills, and gorgeous produce. Inevitably, I would end up chatting with the lovely woman who worked at the farm, and she would tell me about her twin boys, the writers. When you have twins, you always chat with others who have twins. It's a club, for sure. You can't understand what it's like unless you've joined, and it is always nice to meet another twin mom to chat with. So each year, Lynnette would tell me about her boys, the writers, who were trying to make a film. I'd never met them, or knew about them more than this.

It is so wonderful to be able to congratulate this mom and these twins today. My week of pain in my knee post surgery has been bearable because I've had this story to enjoy and celebrate Marin. I am so proud of these guys, and I want to tell everyone to go read this book! It is a miracle. It is that first great effort by any artist, that puts them on the map. A dedication to a deadline, and getting it done, despite all odds. I hope that some day, my twin boys will be able to do something as extraordinary as the Miller Brothers, and I can be as proud as my favorite twin mom out in Nicasio. If my leg is feeling great on Saturday, you may see me out in Pt. Reyes with my crutches, waiting to get my book signed for my twins to have some day.

If you go: Meet the Miller Brothers, this Saturday, May 30th, in Pt. Reyes Station. Book Launch and Benefit for MALT with the Miller Brothers at Toby's Feed Barn. 6:30-9pm. Clips from the film will be shown. Oysters, hot dogs, Lagunitas Brewing Company Beer, and Straus Family Creamery ice cream will be for sale, with part of the proceeds going to help preserve more family farms in West Marin. Ticket price for adults includes one beer (I.D. required), price for under 21 includes one non-alcoholic drink. Purchase tickets online or at Point Reyes Books.
2 comments:

In the Studio Today... Session #2; Greenhouse 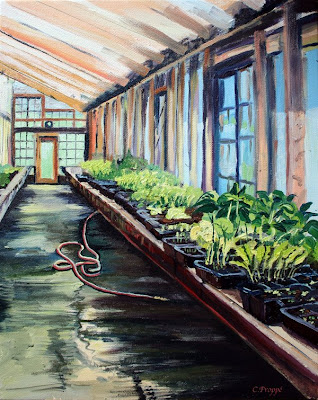 Day two working on this painting I started en plein air in the Cow Track Ranch Greenhouse on Tuesday. For more info on that "Art on the Farm" visit, please see my previous post.
No comments: 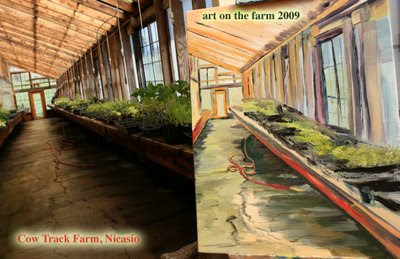 I drove out to Nicasio today to paint with the "Art on the Farm" group at Lizzie Daniels stunning property, "Cow Track Ranch". It's just past downtown Nicasio and the Nicasio school, and also just past Nicasio Valley Farms, where I have seen Logan and Noah's mom smiling and telling me about her twin sons, the writers, every Fall at the pumpkin patch, where my own twin boys have spent endless hours in the jump house and hay maze. Congratulations, twin mom. You must be so proud! : )

Today was a sunny, 64 degree day, with light winds, and perfect weather for outdoor painting. Lizzie boasts of her Marin County Fair "Best of Show" Merlot Red Lettuce(photos below), and it was a sight to behold, growing all over the property, surrounding the barns, amongst the roses, and in the new greenhouse. Liz offered a tour of the greenhouse, where she grows all varieties of organic vegetable and herb seedlings that are sold to businesses such as Local Flora, and provided to several school gardens in West and Central Marin County. Liz has also provided Osteria Stellina in downtown Pt. Reyes Station with assistance, lettuces, and produce. 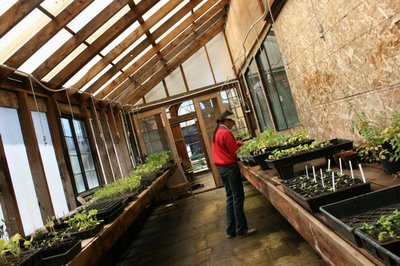 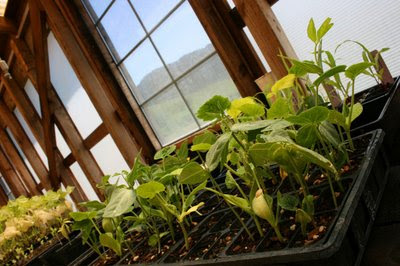 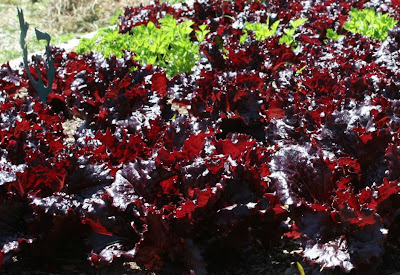 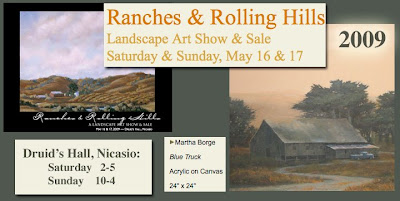 I have been attending the MALT show for more than five years now, and anticipate it every year. As a plein air landscape artist in Marin County, this is the most coveted place to exhibit one's work. To be accepted to MALT for their annual show is an honor, when there are hundreds of landscape painters that would like to hang their work on the walls of Druid's Hall in Nicasio. For me, it is a goal to be included in this group some day, but for now, I enjoy visiting the show each year when I can, and talking to the artists, who often are there to share and discuss their paintings.

The drive to Nicasio alone will have you feeling at peace with our natural surroundings, and then to enter the show is just magical. The walls in this small space are packed like a patchwork quilt; every painting packed into the Hall contributes something unique and special about Marin county farms and land that has been preserved by Marin Agricultural Land Trust. It is a joy and treat for me to be there each year, if not as an exhibiting painter, at least as one in spirit! Please go and support MALT on May 16th(my Birthday!)from 2-5pm, or on May 17th, from 10 -4pm. They offer books, greeting cards and other items that are fairly priced and make great gifts, as well as prints and paintings. Visit the MALT website for more information, and some great audio interviews with participating artists.

You may also want to take a look at the MALT website and a new MALT Blog that is written about Ranches and Rolling Hills, and full of information and inspiration about art and farming, by Elisabeth Ptak.

Finally, you may also want to visit the blogs of 2 MALT artists I have had the pleasure of venturing out to farms with through the "Art on the Farm" group trips: