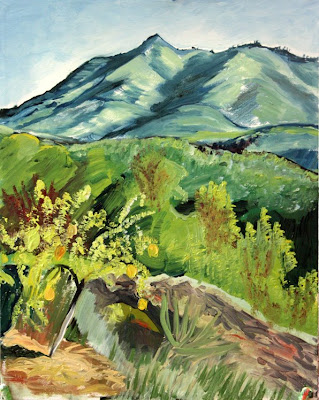 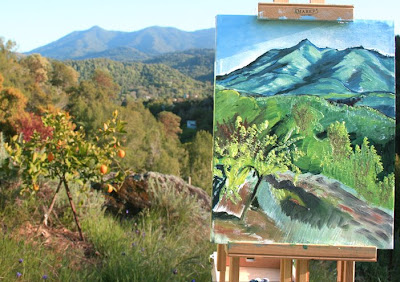 Easel out on the hill just before the sun went behind the hills. Plein air for 2 hours during an Art on the Farm painting group session. I will add more details to pop out the lemon tree and the rock with lichen in the forground.
No comments: 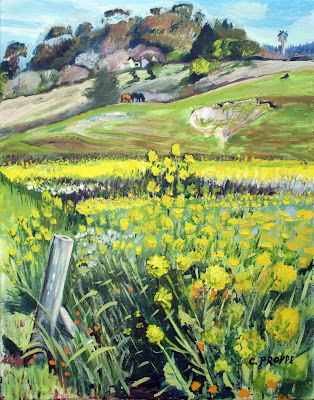 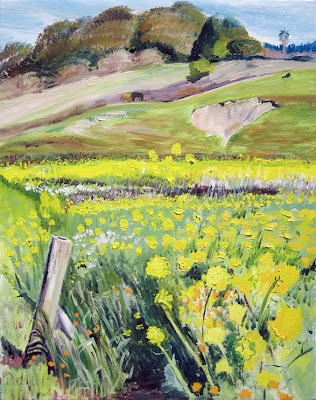 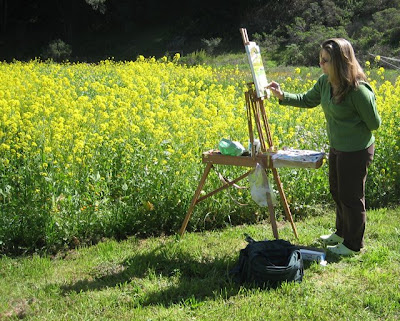 Photo of me painting today, by Deni Wetsel. Deni is one of the organizers of this year's Art on the Farm show, in which 25 plein air artists will visit several Marin Organic farms to paint, with a portion of the proceeds of a Fall show going to Marin Organic.
No comments:

In the Studio Today...Nicasio Fence; Session #4 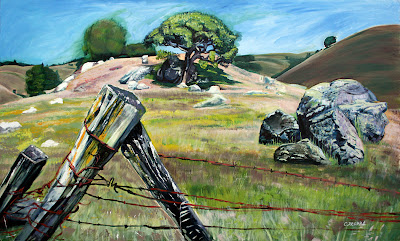 "Nicasio Fence Post with Orange Lichen"... or the longer title would be:
"Xanthoria Lichen: The wedding of Algae and Fungus; Old Fence Post near St. Mary's Church, Nicasio, CA" 5 feet x 3 feet. Today, I painted the edges of this thick canvas with a deep combo of blue, red, brown... I added more detail to the fence posts, and I fixed a tree on the left side, in the background, to make it appear set back further. I was hoping to add more details in the grasses in the foreground, but this is scheduled to be hung Monday morning, and I am afraid it won't be dry in time...

I particularly enjoyed focusing on the fence post and the lichen, and as I was posting this, I found some great information about "fence post lichen", apparently a species that is threatened by modern fence posts. Nick Riddiford who leads groups to explore flora, fauna and lichens on Fair Isle, one of the British Isles writes:

"I draw your attention to a conservation issue which I am not sure anyone has recognized. The lichen encrusted post has become an endangered habitat. Modern fence posts are “treated” to last longer. The sensitivity of lichens to chemicals, and pollution, generally means that it takes many years before colonization takes place – by which time the fence posts have probably been replaced. We should be doing all we can to conserve the “old fashioned” posts so that the habitat and their lichen community are not lost for ever. I do not suggest that we return to untreated posts, but I would urge all who are replacing posts to consider retaining the old posts– perhaps as a feature in the garden if leaving them in situ is not a feasible option. " (February 2007) Link to Fair Isle and Nick's articles

In the Studio Today...Tiburon from Angel Island; Session #2 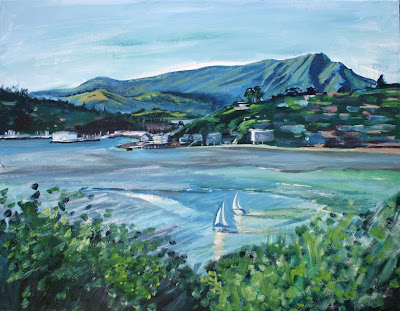 Tiburon from Angel Island 16" x 20" Second day working on this painting, which I started plein air on Angel Island this Sunday.
No comments:

In the Studio Today... Tiburon from Angel Island; Session #1 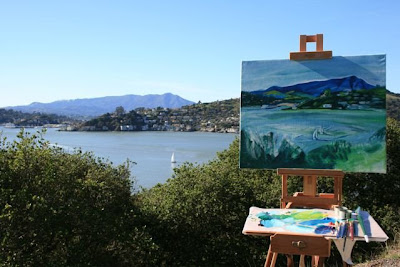 Tiburon and Mt. Tam from Angel Island 16" x 20" o/c
Plein air start- about 45 minutes only, as we had to race back down the hill to catch the 3:30pm ferry back. Looking foward to having more time to do this again. It was a gorgeous day!
No comments: