2020:
"I am painting, song-writing and editing a 400,000 word book as I await hip surgery. I have updated my art blog and have some items for sale to support The Nature Conservancy's tree planting program. I have always been an artist that cares deeply about the landscape, organic farming and climate action. This is the year we must do all we can for the bees, monarchs, oceans and climate. If you get a chance, please stop by ArtWorksDowntown to before Feb. 27 to see the Retrospective show of Phyllis Thelen, 93, Founder of AWD. I was lucky enough to work with Phyllis at AWD over a period of 3 years. Her art ranges from printmaking to sculpture and spans four galleries. Ms. Thelen has always sought to defend, protect and celebrate nature with her art. A 2nd Reception is on Feb 14."

2019:
Colleen worked as a temporary Production Designer on fashion and retail mechanicals in San Francisco. She began a managment class at City College and worked as a Summer Camp art teacher. "Hoping to find a full-time role using my Salesforce knowledge, I attended the free days of the Salesforce events TrailheadDX, and Dreamforce 2019. What I loved most about Salesforce was the seeing how great brand design created a world for business employees to have fun learning, both at events and online via Trailhead. I continued to volunteer with the San Francisco Bike Coalition, biked with my sons in Pride 2019, and raised funds for SFBike Coalition in a Climate Ride from SF to San Luis Obispo. I never stopped writing, riding my bike or playing guitar. Unfortunately, I soon learned I needed a hip replacement and with out housing in San Francisco, I was forced to leave California and stay with extended family in order to have surgery."

2018:
After working as a Production Illustrator for Salesforce.org in October and November of 2018, Colleen started learning Salesforce with the free online training program, "Trailhead".

2017:
In between UX classes, freelance production design jobs and work with Precita Eyes Muralists, Colleen fell in love with the voice of a San Francisco-based band and followed them on tour, something she had never before done in her life. She took an online musicianship class at Berklee. After moving to San Francisco to get away from her past, she found that riding her bike daily, learning guitar and starting to write songs were the main things keeping her going. "I started to create playlists for fun and to learn about songwriting. As I did this, I learned about music history, diversity and gender in music. I remembered so much of my past life through music, and I wrote attempts at songs and funny rhymes, "aka letters" to the band, hoping to turn my tragedy into a fun novel based on my creative journey to freedom."


2016:
Colleen started writing poetry to help her get through the process of leaving an abusive man who she had raised twins with, but never married. With no custody, alimony, or savings, she left to live with a local family and try to move forward but stay close enough to her sons to still be a part of their lives. She wanted to find a way to legally help women in her situation, but first, she had to save herself.

2015:
Colleen updated her skills with Advanced Packaging Design at Academy of Art, San Francisco and has spent the last 2 years working for a variety of natural and organic food companies as a Production Artist. "Learning new tools and keeping up with graphic design is also a passion that helps inspire ideas for my painting. I am about half way done with a children's book I am illustrating about coyotes on Mt. Tam. I look forward to self-publishing soon. I have a few small paintings in the works for the Bolinas "Hardly Strictly Mini" show in November."

2014:
Colleen continued to volunteer with the "Art on the Farm" group of artists and assisted Marin Organic with their first online art auction in the winter of 2013.  She continues to accept commissions and is working on a piece for the Poncia Family of Tomales, including a commissioned painting of the Burbank Family Ranch she completed at the end of 2013.

June 2013:
Colleen became a Google Glass Explorer in June 2013.  The goal of her use of Glass was to create paintings with new angles from the hands-free technology. View one of the paintings here...

Sept 2011 - July 2011:
Colleen worked as Director of Membership for Marin Arts Council, where she enjoyed assisting in the promotion of the Arts and hundreds of artists, poets, authors and theater groups in the Bay Area.


ORIGINAL BIO:
Originally from Connecticut, Colleen began her art education in the Greenwich Public Schools with Steve Wallerstein, the founder of "Arts Alive", a program that brought 70+ artists into Eastern Junior High School for a day to take over the school and teach a variety of classes to all students. Colleen studied drawing and painting with Shirley Jankowich at GHS, and took classes in photography, ceramics, wood and stone carving, stone lithography, and printmaking. Colleen was awarded a student artist grant from the Greenwich Arts Council to pursue her higher education as an artist in 1985. She attended a Parson's School of Design summer program in France, where she learned to paint plein air the landscapes of the Dordogne Region and the architecture of Paris, primarily in gauche and charcoal. One of her fondest memories of painting was in a small village in the South of France. A French man approached her, and spoke to her in French about her painting, reminding her not to forget to paint the window, "la fenêtre".

Colleen went on to major in Art History and Painting at Colby College, in Maine. She studied oil painting under Gina Werfel who is now also in California, teaching at UC Davis. Colleen spent a year at Rhode Island School of Design, in the Illustration Dept., where she recalls learning the technique of the masters of eggshell tempura. "For one of my assignments, I was required to mix my own paint and paint in the style of Velasquez. I copied his painting, "Old Woman Cooking Eggs". 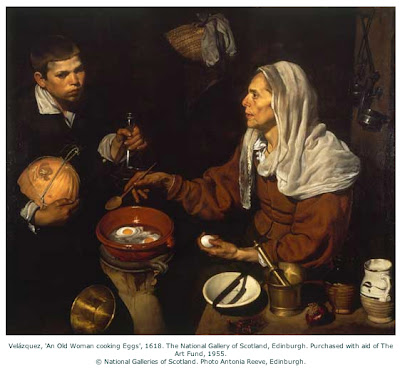 It was very large; 4 feet long by 3 1/2 feet tall. It only fit outside the house I was dorming in, so I had to sit outside on the porch with gloves on... It was winter in New England, and I was freezing! Despite the difficulty of the assignment, it was one of the most significant learning experiences in teaching me about oil painting, and lighting. I learned to layer my colors, from darkness to light."

Upon graduation from Colby College in 1990, Colleen was invited to join a friend to visit Marin County, CA. Colleen recalls falling in love with the beauty and the drama of the coastal landscapes. In 1992, Colleen was accepted at CalArts for Experimental Animation. She studied in the Master's program there for two years. In 1995, Colleen accepted her first animation job in San Francisco, and moved to Fairfax.

After a 7 year career as an animator, and computer artist in Marin County, Colleen decided to make a serious effort to develop her career as a painter. She planned a show for February 2005 at the San Anselmo Coffee Roasters. Her painting of the previous Roasters Shop on San Anselmo Ave. was purchased by town residents and businesses as a gift for the owner when he moved across the street to a new location. 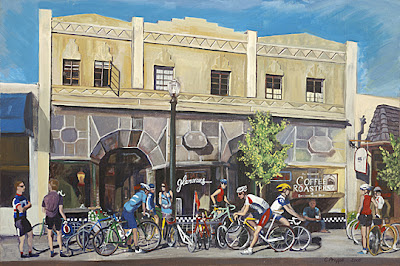 Colleen exhibited her paintings of West Marin and San Anselmo as part of the first Artisan Walk of 2006. Colleen's 2007 solo show and silent auction of paintings of West Marin was well received, and raised 10% for MALT, the Marin Agricultural Land Trust. Colleen has donated her art to auctions for Taste of Marin, The San Anselmo Arts Commission, and Trips for Kids. She is the first recipient of the Wendy Gruber Award for Career Development, given as a grant in November 2007 through the Marin Arts Council.

Colleen's goal is to eventually be accepted in the various shows of Marin plein air artists that work together to give back to the community. "I want to feel I am painting to be a part of something bigger than myself. The idea of my art giving back to the land and the community from which it came brings me peace in my purpose beyond my own therapeutic needs." -C.Proppé 2007